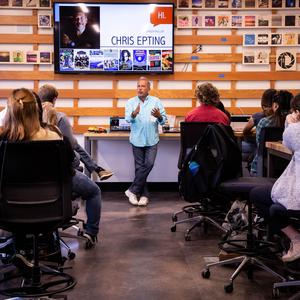 Recently, the Honors Business Entrepreneurship class had the privilege of welcoming guest speaker Chris Epting, best selling author and historian. Epting, who has written more than 40 books on topics ranging from rock and roll history to true crime, has always had a passion for storytelling and a desire to share the stories of the people and places that have shaped our world.


He attributes the start of his creative career to the phone call his fourth grade teacher made to his parents, informing them about the exceptional talent he showcased on a creative writing assignment. It wasn’t until then that Epting recognized his gift for storytelling and began to cultivate it. It was his mentor, American novelist John Cheever, that helped him develop a plan to kickstart his career. The first step? To start writing and keep a journal. To write about big things, small things; frankly, anything.


Years later, Epting received his first rejection from a publishing house for his travel and history book Roadside Baseball: The Locations of America's Baseball Landmarks. During the course of his career, the dozens of rejection letters he received were inconsequential because it only took one “yes” to change his life.


Despite facing numerous setbacks along the way, Epting has never let his fears or doubts hold him back and teaches us to do the same. Instead, he has embraced his passions with unwavering determination and has used them as a driving force to achieve his goals. In fact, he openly admits that he possesses a limited skill set but has worked relentlessly to refine his approach to storytelling, in hopes that it resonates with the masses.


Epting encourages us to chase our dreams not just for personal fulfillment – but also to make a positive impact on the world. For me, the biggest takeaway from his presentation is that through writing, speaking, and storytelling, we are given the tools to shed light on important issues, inspire others to take action and use our own voice to make an impact.


Micah Eley, followed up with Chris Epting after the presentation to ask about his college education experience as a creative major. Over the phone, Epting gave Micah invaluable advice about surrounding yourself with like-minded peers, being proactive, and using your competition as motivation. Instead of succumbing to the dangers of self-comparison and creative insecurity, Epting pushed Micah to analyze his favorite literature and film pieces, pinpoint areas that worked well and emulate those concepts in his own work.


In essence, he reminds us - aspiring entrepreneurs that we can overcome obstacles of any magnitude with initiative, enthusiasm and the sheer will to succeed.


And he leaves us with one vital piece of advice, “If you wanna do something, just freaking do it!”