The Making of a Brotherhood 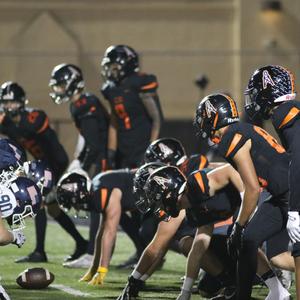 HBHS Football is the epitome of endurance, hard work and teamwork, defining qualities that these players will carry with them into the collegiate field and in other future endeavors. The conclusion of the Varsity team’s season gives us hope that we’ll one day be cheering for them not just on the Sheue Field, but on the big screens. During a nail biting first round of playoffs, HBHS took a heartbreaking defeat in overtime with a score of 28-34 against Orange. Although they lost, it was undoubtedly the best game of the season. In fact, Chris Saifan, player #71, comments on the team spirit, “When you play a game you can just feel the energy of it and this game [ . . ] We all connected really well and played to our full potential.” Although spirits were low, the disappointment following the game had little do with the actual loss, but rather what it meant for the end of the season.
There would be no more team lifts, practices, or bonding over endless hours of watching film from past games. You have never seen comradery until you watch these two hundred pound straight men football players sob in each other’s arms. Football may have brought them together but it was the shared toil of blood, sweat and tears that kept them together. The team’s dedication to each other is evident in how they endure daily rigorous practices without complaint. Captain Nate Taunauu reveals how the team’s genuine sense of comradery has defined his experience, recalling “it was my teammates that pulled me out of a mental slump.” Beyond the field, Nate always looks to uplift his teammates by providing a constant support system in athletics, academics, and their personal lives.
The conclusion of the football season marks just the beginning for a lot of our players, as most of them are looking forward to continuing their athletic journey at the collegiate level. In fact, Nick Loboda looks forward to playing D1 while pursuing his academic interests in civil engineering. Preparing to graduate, Nick reminisces on the highlights of his high school journey, divulging on how joining the team gave him the opportunity to prove himself as more than the underdog. HBHS Football has provided its study body with a means to foster school spirit. Thank you for countless nights of vibrant entertainment and for being the pinnacle of persistence, game after game. We look forward to watching you play once again, this time on the big screens, representing your respective colleges. #Oilers4Life
By Michelle Phan
Have an interesting on campus project or story you want to share? Reach out to our HBHS Business and Design team by completing this form!