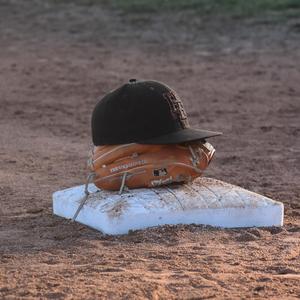 Cade Hart, a Varsity captain speaks on the team and his experiences these past 4 years.

The Huntington Beach High School Varsity Baseball team competes with the top teams and California and last season had the outstanding record of 24-4. This season, Varsity has the record of 5-4, but they are improving after every game mentally and relationship wise. On March 11, Ralph Velazquez, #24 and ASU commit, hit a home run in the first inning which brought tons of energy to the team. Moments like this and the captains, Cade Hart, Nicholas Dumesnil, and Jack Smith, is what is going to lead HBHS to CIF victory.

Cade Hart, #10 and left fielder, believes he earned the role as captain because he is “a good example for the younger players. [He tries] to present [himself] as a leader on and off the field and [tries his] hardest to be there for everyone and help as much as [he] can.” Hart has grown as a player since Freshman year from “learn[ing] from mistakes, overcom[ing] obstacles and [trying his] best to help others.” As a captain, Cade tells every athlete and student to “keep on moving. Failure is the most common thing in life and it is so easy to get angry at yourself and quit. Trust yourself and your instinct and keep the ship moving.” This player trusts the ideology that if people “keep grinding and block out all the negativity surrounding you and trust me, you’ll have a great mindset.” Hart has shown true characteristics of a captain on and off the field.

This season, the chemistry of the team is described as “very diverse”, but there is “a lot of depth on [the] team and [Cade] can proudly say [that] anyone on this team can step up in any given moment and help the team.” With the team consisting of all grade levels, Freshman, Sophomores, Juniors, and Seniors, the boys “all get along very well and have each other’s back[s] no matter what.”


Hart speaks on his Huntington Beach High School baseball experiences and states that they “have been so memorable and [he] won’t hesitate to say that these will be 4 of the greatest years of [his] life.” The coaches, Benji Mendure, Jeff Ruziecki, Adam Springston, Joel Bernstein, and Brett Urabe have “impacted” Cade and his “team tremendously.” Hart strongly believes that they “would not be where [they] are today without them. Coach Medure is by far one of the greatest leaders and role models [Cade] has ever met and [he feels] truly blessed [to have] had the opportunity to play for him [the past] 4 years.”


With the season starting with the record of 5-4, Hart predicts that they will “overcome the losses [that happen at] the start of the season and have a breakout year.” This team is full of a myriad of talented players that all bring an element of speciality to the team. The left fielder expresses that they “have a great chance at running for the CIF title this year and a shot at the NHSI Championship.” With Huntington Beach High School’s successful past, these boys have an expectation to uphold and they will be successful in the end. Article and Images by Kayley Cawhorn