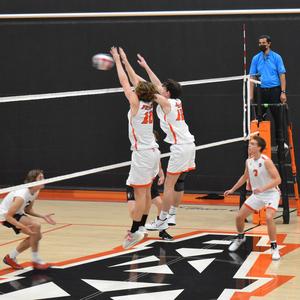 The Huntington Beach High School Varsity Boys Volleyball team had a pre-season game against San Clemente on Thursday night and won the 3 sets. The set scores were: 1st 26-24,

2nd 26-24, and 3rd 25-14. William Lawler, Varsity captain, states that Thursday's outcome “did a good job of setting [the team] up to be successful for this weekend's Best of The West Tournament (especially in the 3rd set).” With competing in one of the toughest leagues, Sunset, Boys Volleyball have started their pre-season with an outstanding record of 8-2 and placed second in the Redondo Tournament.


From Lawler’s Freshman year experience he learned the importance of team relationships  and ensuring that there are no “cliques”. He exemplifies how his goal as captain is to ensure that “everyone on the team [are] friends and [have] good chemistry.” Lawler states that the “upperclassmen do a good job of leading the team and [he] think[s] the underclassmen will develop into very high level players the more experience they get over this season.” These boys have not only instilled an amazing mindset from their teammates but also the “coaching staff has done a great job” continuing the “good vibes and hard work.” Our Huntington Beach High School Boys Volleyball team is not “the type of team that can flip a switch and suddenly play amazing”, Lawler states, they “have to come into every match with the same mentality of beating whoever is on the other side of the net that night.”


These boys have a lot on their shoulders for being the State Champions last season, however the “amazing chemistry” and “having 19 guys on [the] team is one thing, but having all those guys be close friends is something special.” William Lawler believes that this team's chemistry and team goal of “winning the next match in-front of [them], no matter who it is” is what “will make [them] CIF title contenders” once again.