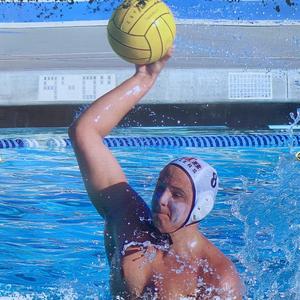 James Rozolis-Hill, a senior at Huntington Beach High School, committed to Harvard University this August for Men's Water Polo. James has been a huge asset to Huntington Beach this season by leading his team to the final round of CIF and Regional semifinals. The 6’5” utility received MVP of the season, Co-MVP of Sunset League, First Team All CIF, Scholar Athlete, and Captain for his senior season. Rozolis-Hill has also been a member of the USA Men’s Water Polo team since the eighth grade. His athletic achievements in combination with his academic prowess sets him apart, making him the “full package” in the eyes of the Harvard Men’s Water Polo coaches.

When COVID-19 first broke out in 2019, Rozolis-Hill made the decision to not play water polo his Junior season in order to be cautious and protect his family members. Being a high performance athlete, a decision like this doesn't mean he took the year off. He continued to train rigorously, utilizing his community pool and stationary bike, to stay in physical shape for the upcoming season. When James returned to the pool, he stated, “It was like I never left.” He was immediately surrounded by his teammates and felt a sense of familiarity and thankfulness. The Harvard-bound athlete also exclaimed that his family was a huge part of his success as they are always his biggest support system.

James' game play is definitely worth coming out to watch. The 17-year-old uses an uncommon technique of lobbing the ball into the goal compared to the traditional power shot. It is obvious that this method has worked wonders for James and his team this season. Sasa Bransiavljevic, Head Varsity Coach, emphasizes that, “Watching James do moves with the ball at times seems so effortless and simple that I often don’t know what I’m looking at. In the back of my mind I know that behind that simplicity is a decade long mastery of fundamentals and pure work.” Rozolis-Hill continued to show his talent by scoring an impeccable backhand goal against Harvard-Westlake High School. When James was asked about the personal significance of this goal, he answered, “Zach Bettino threw the same pass to me in the USA U14 game and I scored. I have attempted this shot a lot in practice and always miss it. Matt threw me a perfect dry pass.” Making this shot changed the entire dynamic of that game, not only for the team but for those eagerly watching in the stands. When asked to speak on the HBHS Varsity water polo team dynamic, James stated that, “The team consists of a great group of guys that have unbreakable chemistry.”

HB’s last game of the season was in the Regional Semifinals against Mater Dei High School. The match was a sophisticated, technical, and a brutal battle between the two teams. Two powerhouses butting heads, igniting a fire in each of the players, making this match a true wonder. After a riveting game with 30 seconds left on the clock, Mater Dei scored and were off to the finals. Rozolis-Hill spoke on the outcome of the game stating that, “I think we played well, Mater Dei was hitting their shots all game, but we as a team were still happy with how we played.” The positivity and amazing sportsmanship that James possesses is a rare trait in an athlete, especially after a devastating loss in Regional Semis. Coach Sasa continues to express how, “James’ greatness does not lie in his ability to score 8 goals or take charge of a game. But it is his kind heart that shines through his eyes and ears.”

After receiving offers from a myriad of schools, the senior exclaims that “Harvard is where [he] needs to be and [he is] excited for [his] first collegiate season.” James Rozolis-Hill plans to study Environmental Science with the intentions of pursuing a career as a Professor. The sky is truly the limit for this young player, and we all can’t wait to see what obstacle he demolishes next.